The Grave Robber bottle is known to collectors as an extremely rare item. The same Dr. Doughty sold a medication in a smaller bottle marked simply “J.D. Doughty / Cincinnati”

The words “grave robber” may be unique to this bottle – a remedy for death is an odd twist on the 18th century practice of surgeons who sought out fresh bodies for dissections.  See the fascinating and gruesome book, “The Knife Man” by Wendy Moore.

More information on this auction can be found on the auctioneer’s website at https://www.americanglassgallery.com 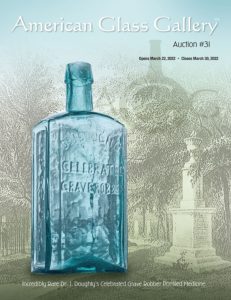 It’s clear.
It’s machine-made.
It does not even appear to have any embossing.

Without its label, this bottle would not even fetch a nickel to any sensible collector. However, some found it irresistibly rare and exciting enough to drive the bidding at eBay.com to $5,600. There were 18 bids and numerous bidders hashing it out until the final moments of the auction.

By way of comparison, the seller had posted quite a few other similar pre-Prohibition whiskey bottles with labels – an attractive grouping – and no other fetched more than about $100. That, in this author’s mind, is a typical sum for such bottles.

Guess this Mammouth Cave Whiskey is a good (and rare) one! 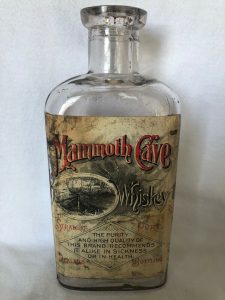 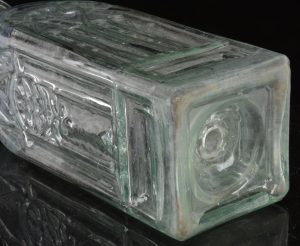 A quart Mason’s Patent 1858 canning jar passed the $5000 mark at auction recently on eBay.com  The jar, in perfect condition in a medium but rich blue color came from an estate auction.  The seller thought it might be a 1970s reproduction.  Despite the vague description, collectors quickly realized the jar, with its ground lid, was authentic.

The beautiful and unusual blue color set this jar apart from the sea of common aqua jars. 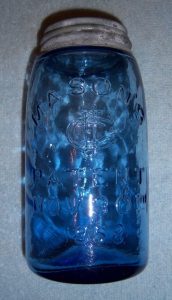 It is not often that such a great assembly of rare bitters and whiskey bottles end up in the same room.  A collector needs to spend decades putting together a top-shelf collection.  Bob Ferraro did just that, putting together a grouping of great bottles, many of which are rarely available for sale.

Glassworks Auctions recently sold the Ferraro collection in a three-part auction, the final section closing on January 9th.  A total of 141 lots racked up a total of $482,305 not including the auction house buyer’s premium.

One could go on endlessly about the quality of many lots in this sale.  A stunning brilliant yellow olive figural Fish Bitters with Carlyn Ring provenance swam away at $5000. An authentic, original E.G. Booz cabin whiskey bottle brought a very strong $4750.

There were several dozen barrel bitters in total, many in rare and unusual colors. Lot 50, a Bourbon Whiskey Bitters described as a light pinkish topaz closed at $4250. A Roback’s Stomach Bitters in a highly unusual and rare olive green coloration undoubtedly say strong bidding, ending at $13,000. However, perhaps the barrel highlight of the sale was the Highland Bitters and Scotch Tonic of lot 107. In a rare and unusual deep but translucent olive green, this barrel rolled up to a $13,000 closing price.  The 13,000 dollar mark could represent a record or near-record price for a barrel bitters.

Lot 114, the Peoples Favorite Bitters, is an extremely rare barrel mold with diagonal ribs on the body reminiscent of the George Eagle soda bottle. It is an ex. Carlyn Ring bottle and its provenance helped drive it up to a closing price of $30,000

We captured the Ferraro prices realized lists from all three parts of the sale after bidding and callbacks had ended, and have posted these here on the site in PDF format.  Note that the prices do not reflect the 15-18% buyer’s premium.

A Tale of Two Jacobs Demijohns

New theme rolled out today which freshens the look and provides a much improved experience for mobile viewers.

An amber coffin-shaped poison bottle, with overall patterned hobnail decoration, recently fetched $6766.00 on ebay. Apparently the seller, who had listed a large number of bottles for auction, was unaware of its value. As is often the case, just three individuals carried the bidding over $1000. 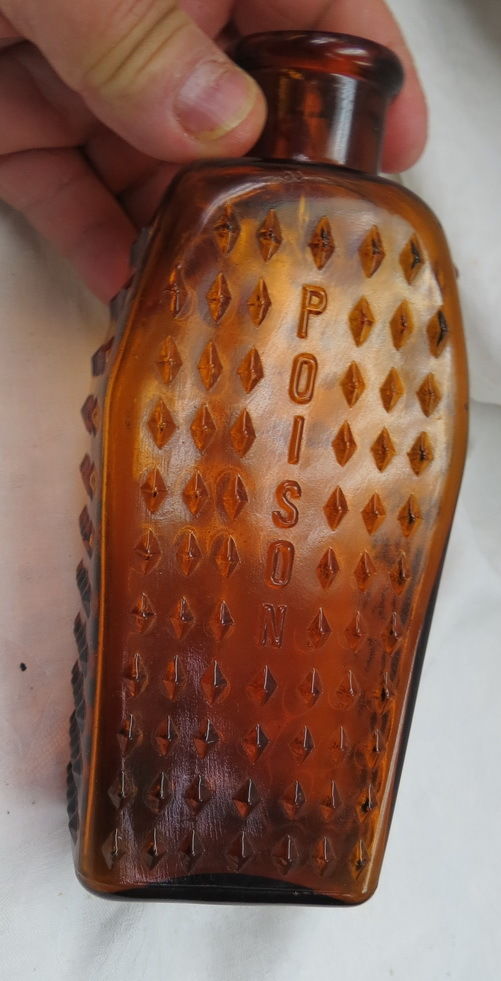 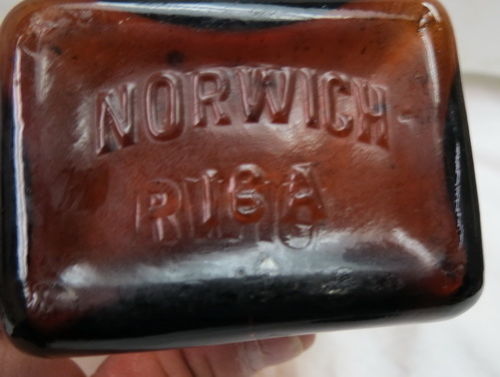 Headed for a New Auction Record

Bottle collectors are keeping a close eye this week on the current Glass Works Auction sale. The bidding on lot 169 has exceeded $100,000 and could double that amount.

The battle is on for a perfect example of a Columbia / Eagle flask from Kensington Glassworks in Pennsylvania. It is one of three known examples in cobalt blue.

Here is a direct link to the auction lot: 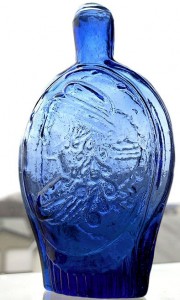 Up for auction at Skinner Auctions on March 1st is a bottle which, in form, is well known to bottle collectors. It is a black glass ale bottle of about 9 inches in height dating from the late 18th century or thereabouts. Nothing too unusual – you can buy one without a whole lot of difficulty for $100-150.

Then there is Lot 5 in the Skinner sale.

Thanks to more than a little bit of provenance and connection to our first president, Skinner has placed a pre-sale estimate of $10,000 to $15,000. I am sure many collectors will be interested to see where the bidding ends.

Affixed to the bottle is a label bearing the text, 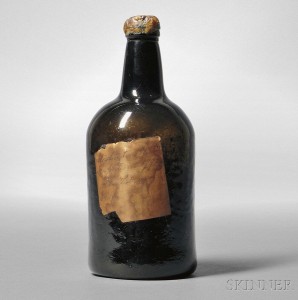