Topping recent auctions by a long shot was the rare Mississippi bottle which is a figural of a stump and grape leaves and was supposedly fresh to the market from an old collection. Known as the Imperial Levee bottle (it is embossed Imperial Levee / J Noyes / Hollywood, Miss.), it is rare especially in blue. One recently sold at a Glassworks auction for around 13 grand and this one cruised by to top out at $18,800.

Other big winners included an 18th century octagonal black glass bottle with applied seal marked simply with the initials “EC” also described as recently found by a diver in a river bottom in Guyana. It brought $8,992.

This is a small antique bottle show but one that many look forward to attending each January. This year a snowy Saturday did not deter dealers from making the trip and the crowd was better than ever. The hall was packed for a good portion of the show hours and many dealers reported better than average sales in all price ranges.

Many dealers have been grumbling for several years about lackluster attendance and poor sales….Perhaps this is a sign of a rebound to the economy and the sale of antique bottles at shows in specific? We hope so.

Sometimes there is a need to call someone at ebay or PayPal to correct a problem that cannot be addressed via the online resources of their web sites. But have you ever tried to find a phone number? Good luck! We’ll save you some time and post a few numbers right here:

Thanks to clicheideas.com for assembling this contact information along with amazon.com phone numbers.

Note: If you have been stung by a bad deal or some other problem with a transaction, you are probably better off addressing that using ebay’s dispute resolution service. Although making a phone call seems like you are taking immediate action, you may just get directed back to their online services!

The Don Pickett antique bottle collection continues with another session that kicked off in mid December. Rumor was that some good deals were had in part one despite claims of poor descriptions. The current session ends January 19th.

The auction, with online bidding, can be found at bottleauction.com

Although their website address is nearly the same as ours (bottleauction.com vs. bottleauctions.com), the two sites are in no way affiliated.

Delmarva Acquisitions and Appraisals, Inc. completed their first auction on December 10th which showcased 59 lots of American glass and antique bottles. Highlights of the sale included a monumental Pittsburgh pillar molded footed jar with lid which brought $5500, a large amethyst footed vase with matching witchball which closed at $2400 and a matching pair of unusual vases which sold for $1900. The latter were similar to a pair found in Innes’ Pittsburgh Glass.

Owners Waring Gates and Bill (sorry, I forget your last name Bill!) are anticipating 4 auctions per year. More information can be found at their web site, http://www.delmarvauctions.com

Happy New Year. We have finally completed the new site layout and incorporated the look into most of the site along with some new content. You can expect to see lots more in 2005!

I do not think this is the first time I have seen this rare applied-handle, chestnut-shaped Dr. Townsend’s Stomach Bitters on ebay. This time around it closed at $9800 but did not make reserve.

Bottles And More Magazines Galleria 7 auction closed 11/01/04 with 113 lots – part 2 of the Roger Long collection. Notable were the collection of sunburst and other scent bottles, a large offering of rare (mostly) Eastern soda bottles as well as a small grouping of very desireable ink bottles. The top of the sale was a gallon- sized cobalt blue Harrison Columbian master ink. This rarity brought $45,000 plus 12% buyers premium. Other outstanding finishes went to the superior example of the George Eagle soda in cobalt which brought $9,500…I remember that bottle when Chuck Moore sold it in the late 80s or early 90s for about 2 grand, at that time likely a top soda price. Along with the C. Alfs tapered, sided soda from Charleston, SC which brought $9,000, these are new highs for sodas….a hot market sector for sure. One exception was the Crystal Palace soda, which given its outstanding condition, was a good buy at $1300.

I thought the scents were largely fairly priced – considering their rarity. Many prices were not that much greater than I recall them bringing at a major sale by David Arman in the mid 80s.

I also thought lot 88, the puce Monument / Sailboat Fells point flask from the Pollard collection sailed by at a very fair $2750.

My hunch is the $7,500 paid for the HP Herb Bitters in brilliant green is a record price for that bottle in that color…scarce but one of several on the market in the past 18 months or so.

Overall, another great sale from BAM…my only general request would be slightly larger photos of each lot….

So, you want to have your own blog? Just set it up and start writing? Sure, just wait till you get hammered with comment spam. My first spam comment hit less than an hour after going live.

Fortunately, I have installed Three Strikes, a plugin for WP which I am pleased to say has, for its first four days of operation, solved the problem. WP is great if you are willing to spend a bit of time to finetune the installation 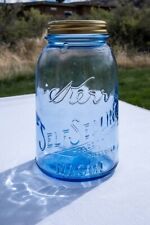